How to Eliminate Foul Odor in Hunting Boots? 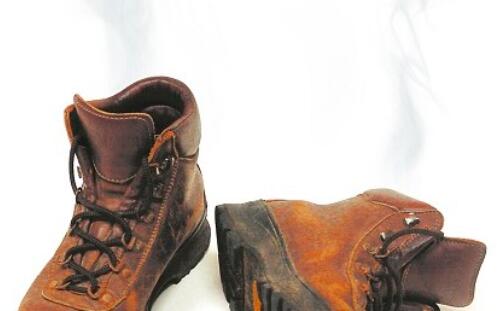 It is amazing how animals pick up scent trails. Through this mechanism, animals can easily walk away from danger, such as a hunter. Therefore, hunters need to think of eliminating any scents or odor that might betray their presence in the bushes or jungle. A major turn off and still contributor to animals’ warning scent on the hunting grounds is your smelling boots.

With the human feet containing more sweat pores than any other part, enclosing it in a hunting boot will most definitely lead to odor. So, how can one eliminate the bad odor in their hunting shoes?

How to Eliminate Foul Odor in Hunting Boots? 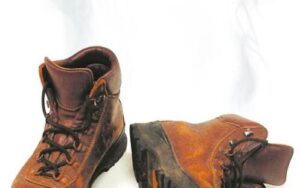 Wash Your Feet with Antibacterial Soap

It is quite surprising that some people will still have their hunting boots smell fresh even after a day out hunting. Well, this narrows down to body cleanliness. The common misconception about the odor in boots is that sweat causes a bad smell. However, the odor in the boots is caused by bacteria action on the body sweat.

Following this, there is a need to establish better hygiene practices to ensure one gets rid of the bacteria load in their feet. Antibacterial soaps are a better choice compared to other soaps, thanks to their low bacteria tolerance. Drying out the feet is also essential to ensure that you keep the feet less humid. Notably, bacterias thrive best in humid and warm conditions.

Dry Out the Stinking Boots

The number one cause of smelly hunting boots is excess moisture. While sweat might be an inexcusable wetness contributor to your boots, wearing boots while moist might have your boots always in bad odor. Notably, bacterias thrive best in humid conditions.

Hence, wet boots might increase the chances of having the smell of the boots. If you lack a sunny spot, other warm or heated places might help dry the hunting boots.

Notably, dry boots reduce the chances of bacteria survival, thus eliminating the bad odor that would result from bacteria action on sweat.

Use of Baking Soda

While there exists a lot of commercial products for fixing stinking, the remedy sits in your kitchen. Baking soda is well known for its absorption and neutralization of odors. To fix hunting boots odor, place a few teaspoons of baking soda alongside corn starch in your boots overnight. Acting as a natural deodorizer, baking soda kills the bacteria in the hunting shoes.

You may also spray a mixture of baking soda and white vinegar to eliminate the odor in your hunting boots. However, this method might leave the hunting boots leather extremely dry following the baking soda absorbing moisture.

After cleaning your feet, you probably need a clean pair of socks for your hunting boots. Wearing the same socks might retain the bacteria load, hence no much help in eliminating the bad odor. You should also avoid cotton socks when wearing hunting boots. The cotton fabric absorbs moisture instead of wicking it away from your skin.

As a result, this leaves your feet even damper hence enhancing the bacteria build-up. While this adds to the odor in the hunting boots, the feet’ dampness is also uncomfortable while hunting. Woolen socks are recommended while using hunting boots since they wick moisture more effectively.

Check on How You Store Your Boots

The storage condition of the hunting boots after use might be the cause of their foul smell. You probably need to place your boots in locations where bacteria cannot thrive. Notably, this calls for avoiding any damp locations, including outdoor cupboards. After every use, considers placing your boots in a ventilated and dry position. Placing some baking soda in the boots might also come in handy in drying the boots.

Using soapy water or a mixture of water and vinegar to clean the insoles is recommended. Consider washing your insoles at least once every two weeks as part of the hunting boot maintenance routine. 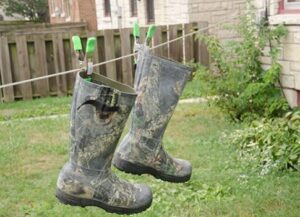 Like having several socks, additional pairs of hunting boots might help you eliminate the bad odor building up in the boots. Having several boots ensures that used pairs of boots get adequate time to dry. Notably, bacteria build up in the boots is minimized; hence your boots can stay fresh for longer.

Use Tea Bags for the Bad Smell

Earlier, we have noted that the bacteria acting on the sweat in hunting boots cause the bad odor. Tea leaves seem to be an antidote for the bad foul in the hunting shoes thanks to their tannin content. Notably, tannin is a chemical compound in the tea leaves well known for its antimicrobial properties.

Therefore, inserting a few tea bags in your hunting boot after use is a natural way of removing the bad odor. To get rid of the bacteria load in the boots, consider soaking the tea bags in hot water for a few minutes then place them in the boots after they have cooled. You need to ensure that you wet, not the boot, with the tea bags while doing this process.

Consider Freezing the Bad Odor in the Hunting Boots

While you might have a pair of hunting boots to use for more than a day, freezing out your boots might temporarily help fight the bad odor. Exposing the hunting boot to cold temperatures has been suggested to kill bad odor-causing bacteria hence getting rid of the foul smell. Put your boots in a plastic bag and keep them in a freezer overnight, and you will notice a change in smell come morning.

While smelling hunting boots might be a problem, there are several ways to handle this menace. The solutions revolve around reducing the bacteria load and moisture in the boots. Try to adopt some of the above stated natural ways for success in eliminating the bad smell. With the scent trail from your hunting boots eliminated, one can enjoy successful hunting in addition to having your hunting boots fresh.